Staying On The Camino Path 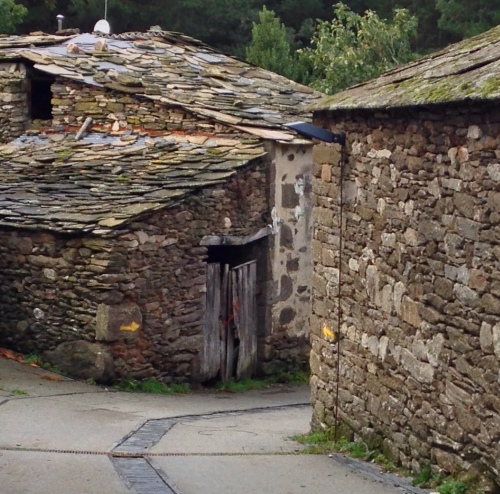 One of the really cool things about walking the Camino, especially the “Camino Frances path” (the path most people walk), is it Is extremely well marked to help keep you on the path. When you think about it it is pretty amazing that all along a 500 mile path you have markers at every turn to help you make sure you don't go the wrong way!

Now it did not always work out perfect though because sometimes you are deep in thought or talking with someone and you might just go right on by that turn you were suppose to make. Then after a short while you would get that “funny feeling” that something was wrong. We had not seen our “yellow arrow” in a while. A quick backtrack to the last time you saw one you would see where you went wrong and off you go again on the right path. Often times a fellow pilgrim would shout out when you went the wrong way helping you from going too far off the path.

One of the funny stories that Terri had was of a woman from Australia that early in the morning (you almost always start each day in the dark with headlamps) missed a turn coming out of the town. (We also had missed the same turn but were able to figure it out and get back to the path agaIn). Well, this lady did not figure it out for some time and really got lost. So she phones her husband in Australia, who is able to determine her location (apparently from her GPS) and re-directed her on a path that reunited with the Camino path.! She walked an extra 4km that day!

We are going to miss our “little yellow arrows” to “keep us on the straight and narrow”!