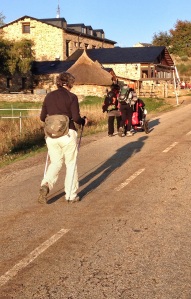 One of my goals of retirement was to try and spend more time outside than I did inside when I was working. Walking the Camino sure moved me a long way in that direction as we spent almost the entire daylight hours outside walking.

I was always aware when I was working that sitting all day at my desk job at Boeing was not good for my health. I used to refer to it as “sitting death”. I recently read an article in “Scientific American” magazine entitled “Killer Chairs”. It supports the scientific evidence of what I had been saying; sitting kills us prematurely. We were made to be moving more than sitting.

The studies are very clear after years of research; sitting is not good for our health. One study followed 8800 adults for 7 years. Those who sat for more than four hours a day while watching television had a 46% increase in deaths from any cause when compared with people who sat in front of the tube for less than two hours a day. Overall, when you combine all causes of death and compare any group of sitters with those who are more active, sitters have a 50% greater likelihood of dying. Sitting for long periods is bad because the human body was not designed to be idle.

These studies have pushed more companies now to encourage employees to get up and move. When I was at Boeing they had a program called “Boeing On The Move”. It provided all employees with a pedometer and had contests to try and get us up and moving more. It makes sense.

One of the things I have tried doing since I have been back from the Camino is to try walking more to some of the places nearby rather than jumping in the car to go there. It does take more time and some advance planning and it doesn’t always work out everytime but it does help in changing my mindset a bit more. A change in our thinking is a good place to start as we become more aware of how healthy it is for us to avoid sitting for too long each day.

Let’s encourage each other to keep moving!

P.S. In the picture above notice the people in front of Terri. There is a young mother that is being helped by a friend or relative pushing her 8 month old child in a stroller! They found a way to stay moving for sure.